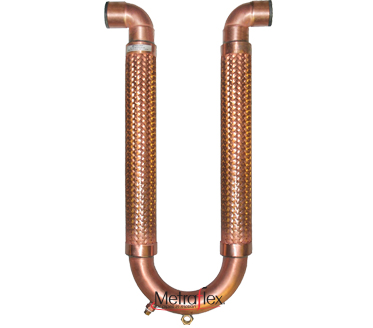 Slim down pipe designs and installations and protect piping from seismic movement, thermal expansion and building settlement with the trim, compact copper Metraloop.

The Metraflex copper expansion joint has these benefits:

Pipes transporting hot or chilled water, steam and chemicals are all subject to varying internal temperatures – as well as significant thermal expansion. While a flexible hose and braid assembly is excellent for absorbing lateral offset and angular movement, it’s not designed for axial compression or torque. Under compression, the braid is relaxed and its pressure rating lowered, while torque introduces complex stresses that quickly fatigue the hose.

If flexible hose and braid are to be used as the stress-relieving, movement-compensating component of a piping system, it must be installed in a configuration that minimizes axial compression.

That’s where the Metraloop joint comes in. Made of flexible bronze hose and braid, it accommodates lateral offset and angular movement. In a pipe run with axial expansion and contraction, a Metraloop installed in a hanging down configuration with its legs perpendicular to axial movement can flex laterally. As long as the legs are designed with sufficient live length, the offset amount never exceeds the elastic limit of the hose, enabling it to flex indefinitely.

There’s no limit to the thermal applications that Metraloop can handle. It can even be designed with lined hose for high velocity, double-braid for high pressures, and all stainless steel construction for media compatibility.

† When ordering a Metraloop with double-braid, please include the letter “D” at the end of the Model #. Example: MLW30200D
* Spring Force: These values reflect the total force required to move the Metraloop its full rated movement for 150 P.S.I. at 70 F.
For higher pressures please contact Metraflex.
** Loops are available in half sections for ease of handling and shipping. If this option is selected add half inch to the “end to end” dimension.