See the game at Metraflex Field

FORD MAY HAVE ITS NAME ON THE OUTSIDE,
BUT METRAFLEX IS ALL OVER THE INSIDE.

With a “footprint” of 1,350,000 square feet and seating for 65,000 fans, Ford Field’s total cost was approximately $300 million. And we feel it should be called Metraflex Field.

Phase 1 encompassed the entire south wall of the stadium. It was made up of two shelled out J.L. Hudson’s warehouses, renovated to include 140 luxury suites on three levels facing the playing field, along with retail, restaurants and possibly a hotel, and the central plant for the facility. Metraflex joints were initially specified for this phase, and, as Phase 1 progressed, the project engineer was so pleased with the Metraflex joints, and the service provided by Metraflex representatives Tim Gorman and Rick Smiecinski, R.L. Deppmann Co., he specified only Metraflex would be used in the second phase – the stadium and fan seating.

Engineers designed the piping system to expand from one point of contact. This created issues for anchoring, in addition to concerns over an anticipated 8-inches of building settlement. The Metraloop expansion joint was chosen because it could easily handle the range of motion, and presented no anchor or thrust load issues. Metraloop joints in sizes one inch to 18-inches were installed.

AGA loops and everything else in a joint

Metraflex products were installed throughout the stadium. AGA certified Metraloop joints were used for gas lines. Metraflex metal bellows joints were installed as part of the snow-melt system on the roof, 18-inch Metraspheres were specified as part of the storm drain system, and a variety of other Metraflex products found their way into this successful project. Now if we can just get the team name changed from Lions to the Detroit MetraGators. 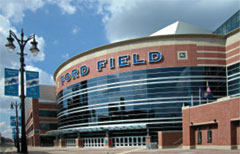 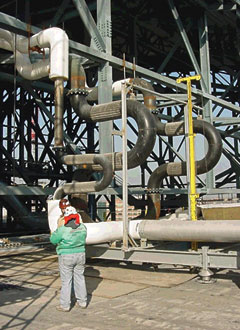 Anticipating up to 8-inches of building settlement, Metraloops were installed to avoid anchoring issues.